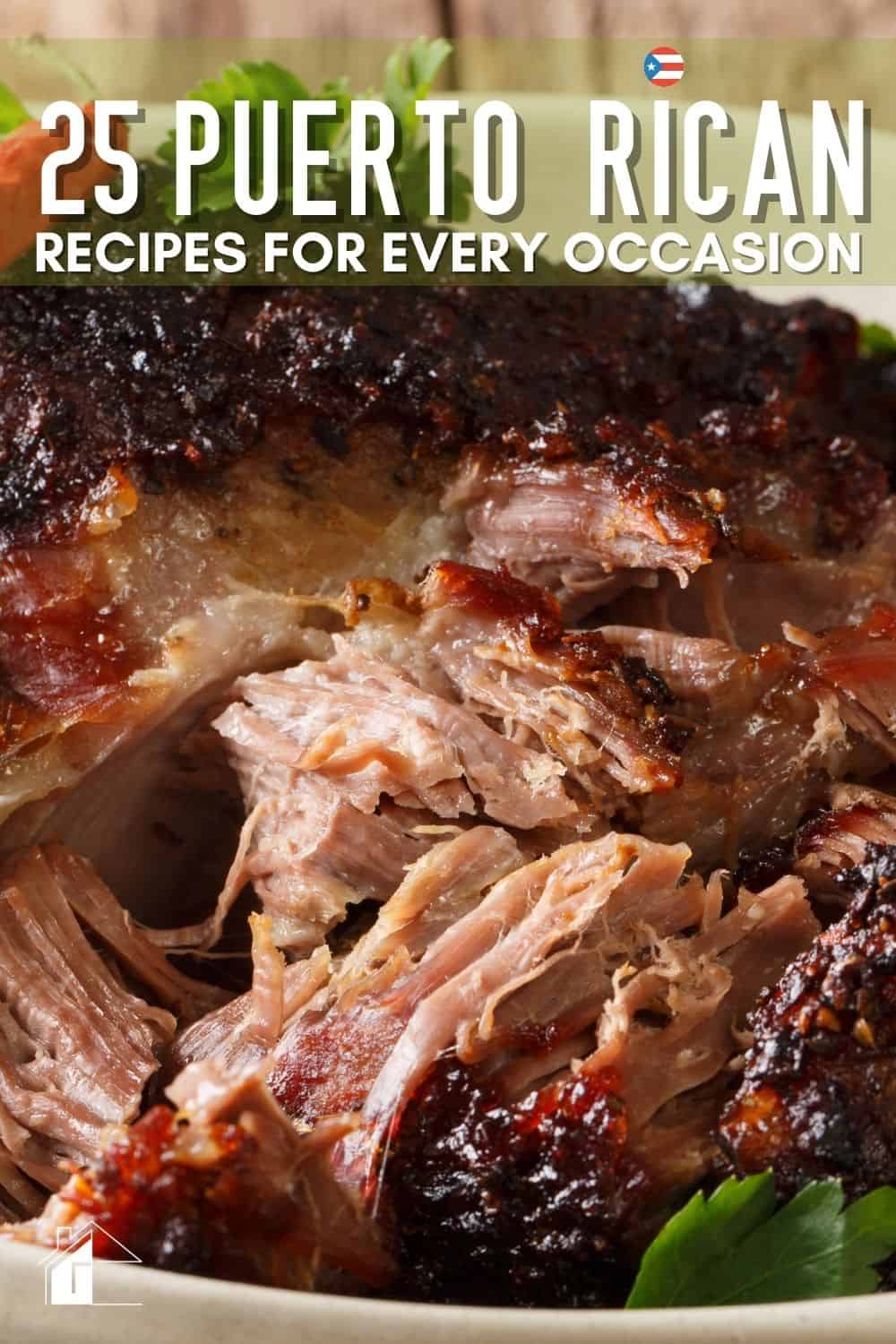 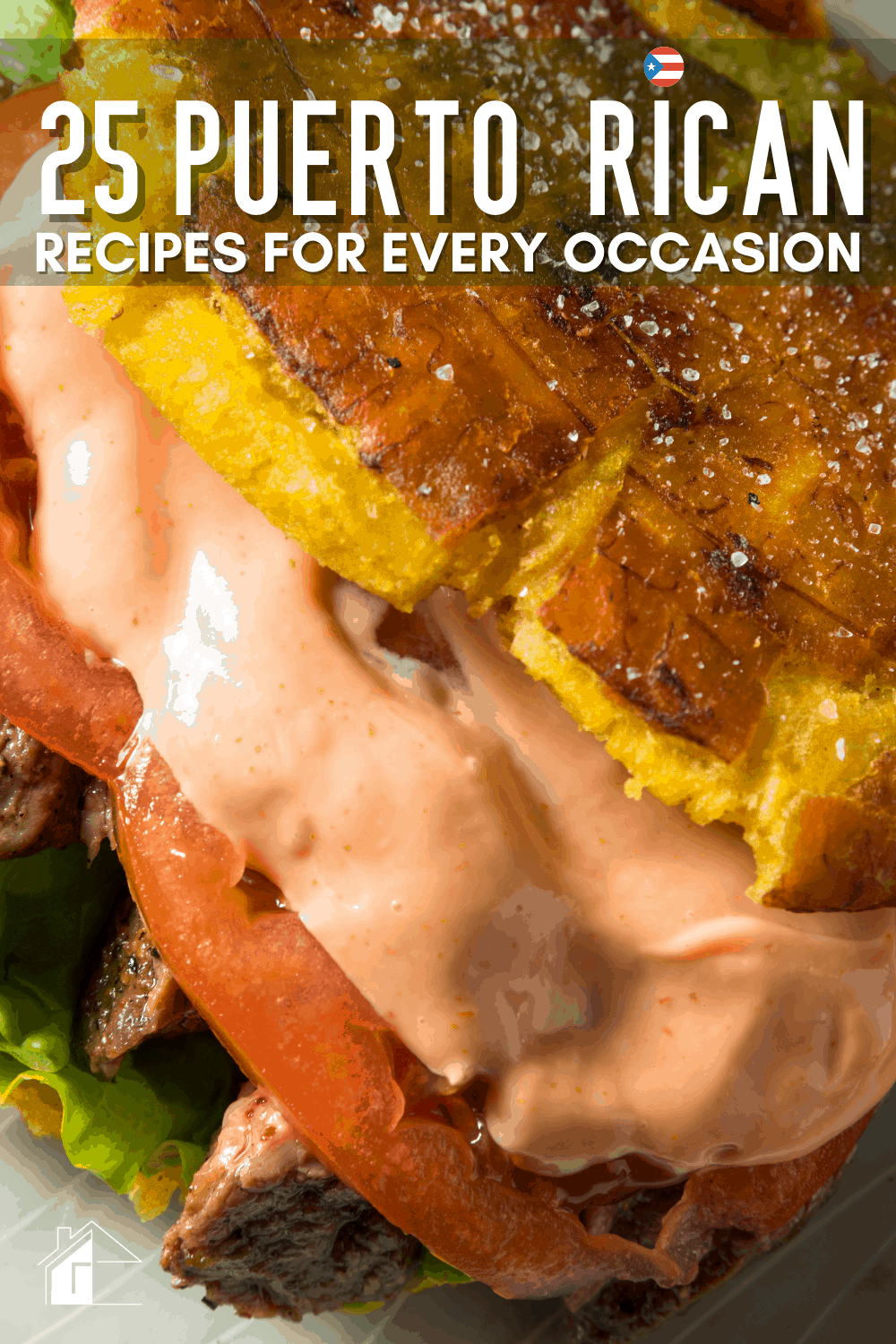 Puerto Rican food is delicious, and it’s also quite diverse. The cuisine of Puerto Rico combines the cooking techniques of Taino Indians, African slaves, Spanish settlers, and other cultures to create a unique blend that has been passed down from generation to generation.

This blog post will explore some traditional Puerto Rican recipes as well as some modern ones too.

Puerto Rican cuisine has plenty of chicken recipes. One such example is Arroz con Pollo, which combines boneless skinless chicken thighs seasoned with sazon, sofrito, and other spices.

The chicken is then simmered in tomato sauce and water to create a rich, flavorful dish that’s perfectly served alongside Puerto Rican Cabbage Salad or with tostones on the side.

Another popular Puerto Rican recipe is Arroz con Gandules which combines rice and pigeon peas, seasoned with tomato sauce, sofrito, bay leaves (or laurel). It can be eaten as a main course meal without any accompaniment, but some people may choose to serve it with fried plantains because they go so well together!

Mofongo is a prevalent Puerto Rican dish. It is usually made with green plantains but can also be made from yellow or red ones. Once the plantain has been peeled and cut into slices, it needs to go through boiling in water mixed with salt; this will help soften them up so they are easier to mash.

Mofongo is mashed together with garlic cloves, pork rinds, and other ingredients. It is usually served with a spicy sauce made out of sofrito, vinegar (or lime juice), and hot peppers.

Mofongo can be an appetizer or a meal, depending on what you put in it and how much meat you want to add. It’s best served when hot., but it can be eaten at room temperature as well.

There are many different ways of making Mofongo, with some people adding shrimp, garlic, steak meat, chicken, and even crab.

Alcapurrias are another popular Puerto Rican dish. They are fried dough balls that are stuffed with or pork. The dough is made of grated yuca and green plantains.

They are stuffed and rolled into cylinders and deep-fried until the alcapurrias are crispy on the outside.

Arroz con leche is the most popular Puerto Rican rice dish. It is made with long-grain white rice, milk (or a combination of evaporated and condensed milk), cinnamon sticks, cloves, salt, raisins, or sugar.

Tembleque is a Puerto Rican pudding. It is made with whole milk, cornstarch, sugar, and condensed milk.

The ingredients are mixed in a bowl or pot on the stove until they become thick enough to coat the back of a spoon when stirred slowly.

Pollo Frito, or fried chicken, can be found throughout most Latin American countries, but there’s no doubt that Puerto Ricans make them unique! These delicious treats are often accompanied by plantains (fried bananas) and white rice.

Asopao de Pollo is a Puerto Rican chicken stew. The dish is made with chicken, rice, sazon, garlic cloves, and vegetables like carrots or celery.

Puerto Rican famous beans are mouth-watering. Habichuelas guisadas, which means stewed beans in Spanish, are made with red kidney beans and ham. This dish is often served with white rice or yellow rice and meat, such as chuletas fritas.

Rellenos de papa has been recently adopted by a new generation of cooks who have given it an even fresher touch. The dish consists of mashed potatoes stuffed with ground beef before being fried in butter until golden brown and crispy on the outside.

Puerto Rican Coquito is a popular Christmas beverage. Made with coconut milk and condensed milk, and more, it is traditionally garnished with ground cinnamon on top.

Bistec Encebollao is a traditional beef dish from Puerto Rico. It’s made with cubed steaks, onions, tomatoes, garlic, and other spices in olive oil.

Pasteles are a traditional dish from Puerto Rican cuisine. Pasteles are tamales made with pork and chicken stuffing encased in masa made of green plantain, yuca, and other vegetables wrapped in banana leaves.

Tostones are fried plantains that are flattened and fried. Tostones can be eaten as a side dish or used in preparing other dishes such as tostones Rellenos which is when the plantains are hollowed out, stuffed with meat, battered, then deep-fried.

Puerto Rican Empanadillas are a fried pastry filled with ground beef, cheese, chicken, or seafood. Empanadillas dough is made out of flour and shortening, mixed with a small amount of water to create the dough.

Carne Guisada, also known as stewed beef, usually served with white rice and beans, is another popular Puerto Rican recipe you might enjoy for dinner.

Puerto Rican Pasteles de Yucas are made from grated yuca root that has been mashed together with boiled green banana, seasoned meat (shredded pork or chicken), and wrapped in a banana leaf.

Chuletas fritas are pork chops that are seasoned and then fried. Generally served with rice and beans.

Guineitos en escabeche Pickled green bananas made with vinegar, garlic, bay leaves, oregano flakes, black peppercorns, and salt; this dish is mainly served as an appetizer or snack food along with drinks.

Sorullitos de Maiz is made from cornmeal dough, rolled into a long thin strip, and fried.

Pernil Al Horno (Roast Pork Shoulder) is a traditional holiday dish in Puerto Rico. The meat is usually marinated in a mixture of orange juice, garlic cloves, salt, and pepper. It’s then slow-roasted in the oven for hours until it becomes tender and juicy.

Bacalaitos are fried codfish fritters. They are typically served as an appetizer or snack food to go along with drinks.

What are Bacalaitos made of? Bacalaitos are made from salt cod, onions, garlic cloves, and flour. These ingredients are mixed with a little bit of milk to form the dough consistency before they’re deep-fried in oil or lard until golden brown.

Arañitas are made from green plantains that are shredded and fried. To make this recipe, peel the green plantain, shred it, and season with your favorite seasoning. Next, take a spoonful of the shredded plantain and place it on the pan. Fried until both sides are golden brown.

Puerto Rico is a small island in the Caribbean with a rich history and culture. From Taino Indian roots to Spanish colonial rule, other cultures have been continuously influenced for centuries.

This long-standing tradition of blending different cooking techniques creates an eclectic cuisine found throughout the country’s restaurants and homes today. Explore more about this fascinating destination on our blog or contact us if you want help exploring your own interests!

1. Bring a large pot of water that has been lightly salted to a boil. Boil the octopus whole for 2 minutes. Remove the octopus from the boiling water and allow it to cool.
2. Place the large bunches of herbs in the bottom of a Dutch oven and then add your octopus that you have roughly chopped into larger pieces. Bake covered at 250 degrees for an hour and 45 minutes.
3. Once the octopus has baked, remove from the Dutch oven and allow to cool. You want it to cool enough that you are able to handle it easily. Remove the outer bits that are a bit slimy and then chop the octopus into smaller, bite-sized pieces.
4. Toss the chopped octopus with the cucumber, red onion, jalapeno, cilantro, dried oregano, lime juice, apple cider vinegar, and olive oil. Make sure everything is well combined.
5. Refrigerate until chilled, at least 2 hours.
6. Stir in the tomatoes and serve. 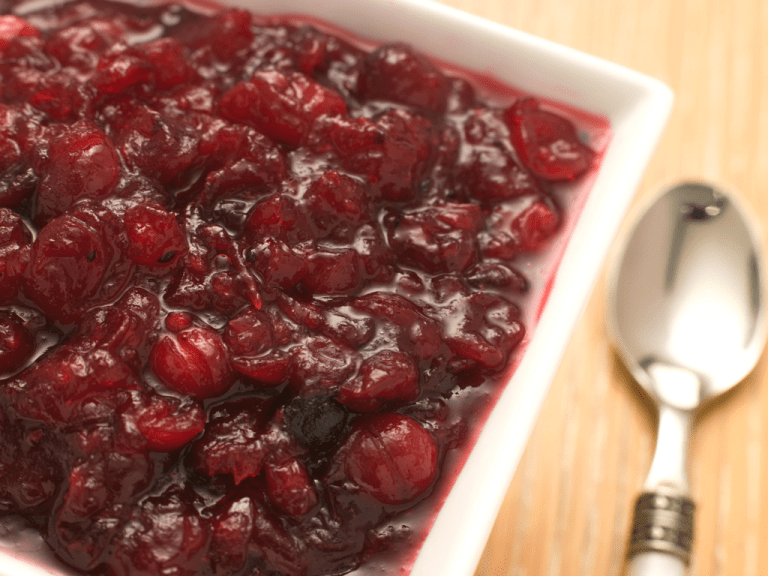 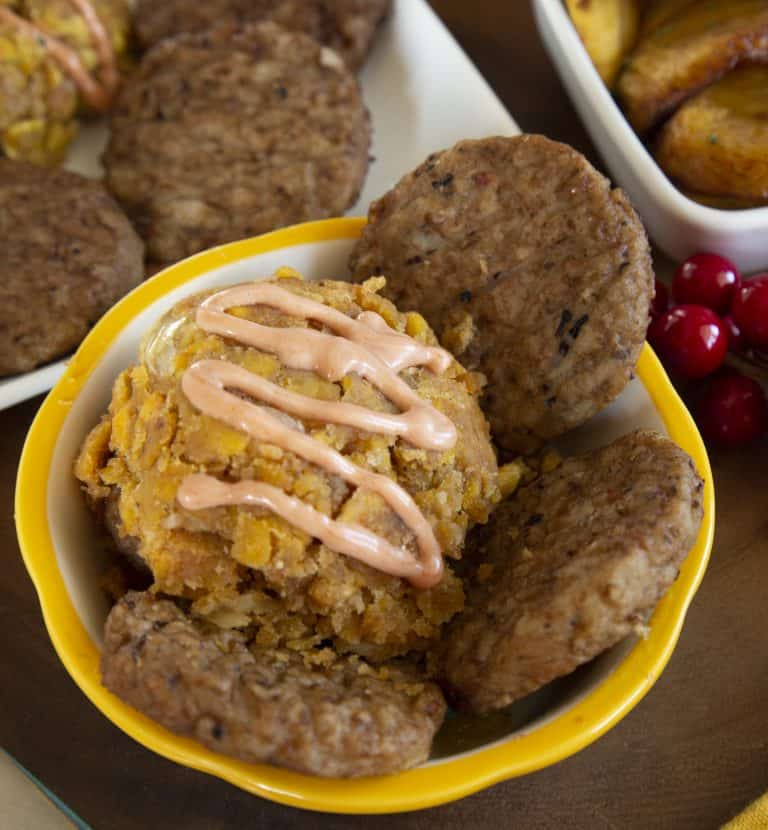 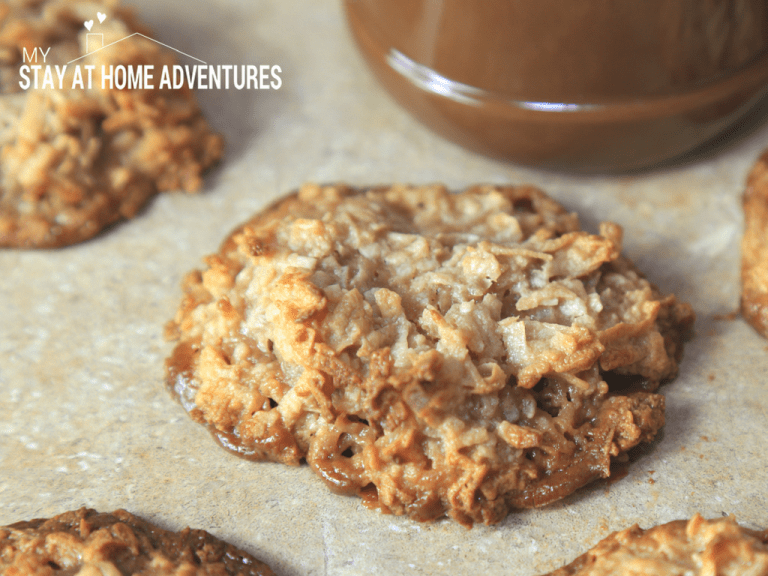 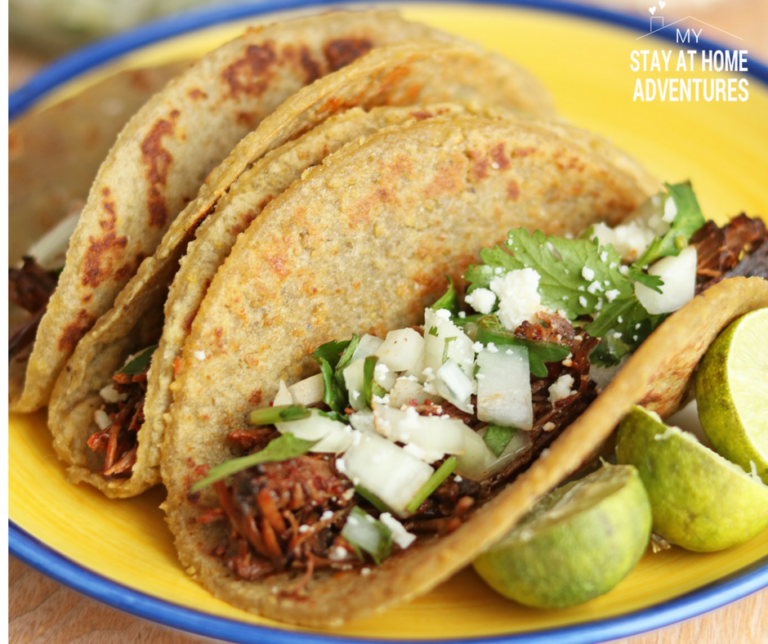 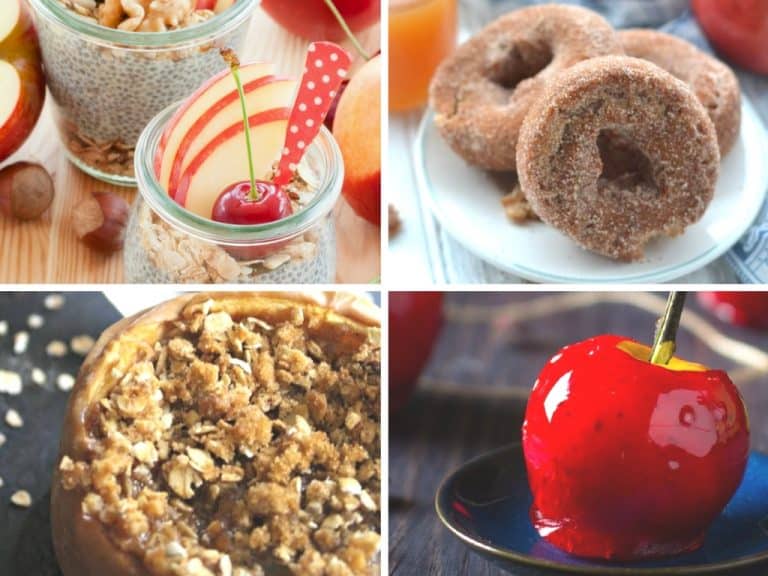 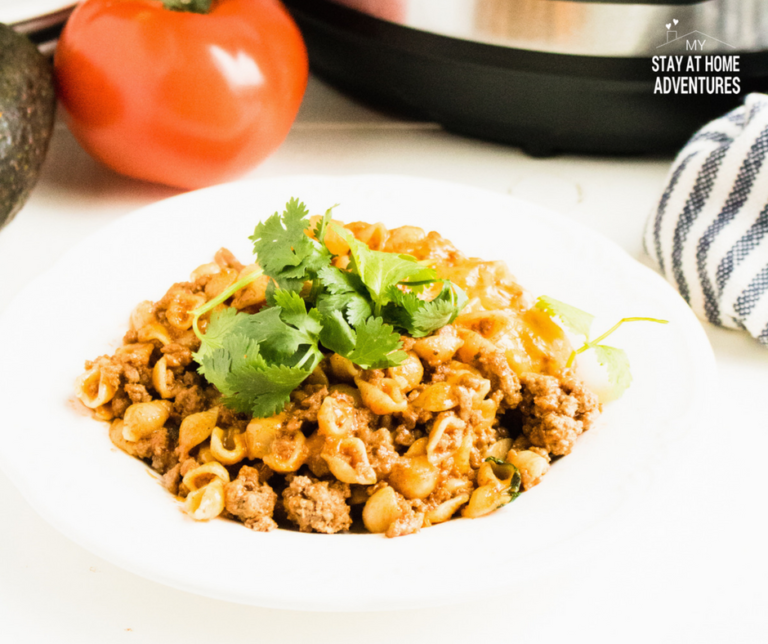